Happy New Year to all who love Nainital 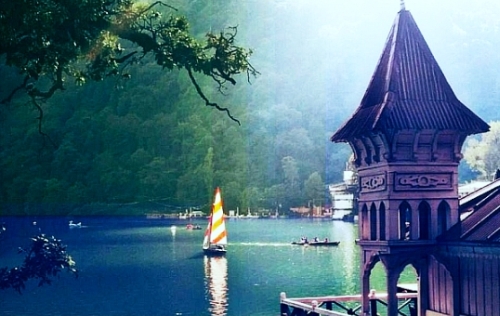 As a result of fate and destiny, I have lived in many different continents and parts of the world in my brief something life of sixty and some years. My experience tells me that it is fate and destiny where one ends up living rather than one’s own choices in the matter.  As I look back, it is clear that the happiest periods of my life were spent in Nainital with the grace of the Goddess of Nainital – Naini Mata – and the Lord. I spent my childhood in Nainital and have visited later whenever opportunity permitted. The scriptures assert that when one leaves this body and is born again in a new life, it is usually in a place that is most on one’s mind during one’s last days and I suspect in my case it shall be Nainital.

The District of Nainital is indeed one of the most beautiful districts on our planet with a diverse flora and fauna depending on where one is in the district with the Naintal town in its center. Unlike the plains, in Himalayan districts, the flora and fauna can change dramatically every few thousand yards. This is because it depends on the height from sea level, the sunshine as determined by shading of the specific hill that surrounds it and the extent of moisture at the location which too varies dramatically across the district depending on location of lakes, rivers and springs that run through the district. Nainital is indeed a beautiful district and it is up the people who live there and others who love it to make contributions to ensure it remains so. Over the past six decades, unplanned development, human greed and careless governments have compromised this beauty it in its most inhabited parts that include Nainital Town and the Town of Haldwani in its plains.

Wishing a Happy New Year 2017 to all who love Nainital! May the Goddess Naini Mata bless them.

Popular posts from this blog

Who was Babaji or Baba Haidakhan?

If one were to select a likely abode of Gods on our planet, it would likely be highest mountains on the planet, Himalayas- including its greener hills, valleys and caves in lower ranges fed by pristine waters of melting snows of the highest peaks and lakes. Here the air is fresh, cool and crisp and because it is relatively close to equatorial regions, not so cold as to be inhospitable even in the depths of winter. Indeed, fresh air, pure water to drink, green fields, wild flowers and groves of Oak or Pine have created areas within these vast ranges that might be most akin to what one might imagine of heaven. However, over centuries, even the Himalayas have not remained untouched by greed and lust with its associated evils. It is a process that seems to have been set in motion several thousands years ago. Just as it is in the nature of humans to begin forgetting God and goodness with prosperity so it is with civilizations made up of them. As evil increased, …
Read more

The Goddesses Nanda and Sunanda of Kumaon

- October 17, 2012
Some of the earliest mentions of divine Nanda and Sunanda are found in ancient Sanskrit texts. It cannot be confirmed if these references have any connection with more recent worship of these goddesses in Kumaon region but they deserve mention for the probable origin of these glorious goddesses. The Bhāgavata Purāna also known as Śrīmad Bhāgavatam, is one of the Puranic texts of Sanskrit literature. It includes  many stories well known in Vedic tradition. The text credits Veda Vyasa, the revered ancient sage, with its authorship. Here is a verse from this text,
“Also, Srutadeva, Uddhava and others, Nanda, Sunanda and other leaders of liberated souls who are constant companions of the Lord” Canto 1 Chapter 14

According to this verse, Nanda and Sunanda are close to the eternal lord with the same position as the highest of Angels of the Lord and amongst the leaders of liberated souls that are constantly engaged in serving God. A story in chapter 12 of the same text about King Dhruva tel…
Read more

Encounter with a Himalayan Mystic – Baba Haidakhan or Babaji

- February 01, 2013
It was early eighties. I was then an Assistant Professor in Mechanical Engineering at the Indian Institute of Technology (IIT) at Delhi. I had rented an apartment a few kilometers away from IIT, at a place known as Masjid Moth (DDA Flats). There was accommodation on campus but with two infant daughters and a live in full time Nanny to boot, available accommodation on campus was a bit too compact for our needs. I lived in this apartment from approximately the middle of 1981 to the middle of 1984.  During this period I had an unusual spiritual encounter. I do not recall the exact date when the encounter took place but the incident itself is crystal clear in my mind.


At the time my wife with nanny and children were away. I was alone at home. It was morning, some time after breakfast the bell rang. I opened the door to find in front of me two Himalayan mystics, an old one and a younger, fair and radiant, well built turbaned young mystic of around thirty. The turban was just a cloth tied u…
Read more

The Abode of Shiva

- October 25, 2016
Mount Kailash situated in Tibet  is regarded as the abode of Shiva-Shankar who was charged with the spirit of the formless and infinite Almighty known by many Hindus as Shiva. Lake Mansarovar, the largest fresh water lake of the Himalayan region is situated at the foot of this mountain. It is situated to the north-east of Nainital District. Many believe that  lakes of Nainital District are fed by waters of this lake through underground rivers. According to mythology, the connection was a result of prayers of ancient sages that medidated on the banks of Naini Lake. Bhim Tal lake also in Nainital District is held by some to be fed from the adjoining Rakshas Tal. It is one of the poorly developed and mantained lakes of the district. Its water constitute a portion of the water supply of Haldwani town situated at the foot of Nainital Hills. Surprisingly the less beautiful parts of Nainital district are those fed by Rakshas Tal, whereas others fed by Mansarovar Lake are charged with extraor…
Read more

The Rightful recognition of Nanda Devi East as Sunanda Devi

- November 05, 2012
It was described in the last post that the goddesses Nanda and Sunanda occur together in mythology and worship. Nanda goddess means the Bliss giving goddess whereas Sunanda means the good bliss giving goddess. One may wonder why the prefix good is added to Sunanda when in fact Nanda is the more active and senior goddess. The reason is perhaps that Nanda Devi also takes on fearful avatars in mythology when she goes about conquering evil demons and at such times adding good is not necessary.
Goddess Nanda Devi has been regarded  variously as a human representation of the Great Mother Goddess and even as that of Mother Earth. Goddess Sunanda has appeared in mythology and  history from time to time as the companion goddess or sister of this goddess. In nature the Nanda Devi mountain, one of the highest in the Himalayas is regarded as a sacred and majestic representation of the Great Goddess on Earth. It is a twin peak mountain in which the lower summit was referred to as Nanda Devi East b…
Read more

The Kriya Yoga as taught by Babaji or Baba Haidakhan

- September 02, 2010
NOTE: Some Modern Yoga practitioners have given the name Kriya Yoga to a different set of practices than its original meaning. Although these latter practices are perhaps beneficial, the author does not know much about them but is thoroughly aware about the original practices.  It may be noted that there is no mention of Kriya Yoga in the Bhagavad Gita and that its first recorded mention is in the Yoga Sutras of Patanjali. The Kriya yoga as advocated by Babaji conforms to its original unmodified definition as expounded by Patanjali. Modern students of yoga must become clear about the differences in order to avoid confusion or misdirection.  For more on this see a separate blog post at:


In an older post “Who was Baba Haidakhan” you may learn more about this holy personality of the Nainital Himalayan region of India. You will find that post as well as the comment and response to it enlightening. To reach it click older post…
Read more